I was at a wedding on Saturday when American Pharoah ran in the Travers Stakes, but I was able to follow commentary on social media. Once I learned that he had come in second, I was pretty upset for my hero. Later I read that his owner said his gut instinct was to retire AP now and not run in the Breeder’s Cup Classic. I figured that AP had put in a lackluster performance.

On Sunday, I was finally able to watch the race. Afterward I was like, hold on a minute, AP was FANTASTIC! There was nothing to be “devastated” about, as so many people had stated on Saturday. Frosted pressured him for almost the entire race and then made his move too early, in my opinion. At the top of the stretch, AP lost the lead, but then RALLIED BACK!

This horse, who has been flown all over the country all year, who was probably exhausted, who was probably, at that point in the race, completely spent, showed his heart and spirit and guts and fought back. Keen Ice was just the fresher horse having stalked the pace for the entire race. I don’t know if AP even saw him coming.

When AP was challenged by Frosted at the top of the stretch and lost his lead, he could have given up. But he didn’t because he’s a champion. He’s a Triple Crown Winner who deserves his shot at the Breeder’s Cup Classic, at winning racing’s Grand Slam. I hope his owners and trainer give him a nice, long rest, and then take him to Lexington, Kentucky in October – where I’ll be waiting to watch him run for history (again).

After watching the race, I told my husband that I thought Frosted’s run was uncharacteristic for him. I’m not used to seeing him push horses in front, and I thought he made his move way too early. Then I read this article about his jockey change right before the race. His normal jock, Joel Rosario, was injured in the race just prior to the Travers, and had to be replaced. Had Frosted run his typical race, I think we would have had a different outcome.

Either way, American Pharoah showed exactly what he is made of: guts, glory, greatness. He truly is America’s Horse! 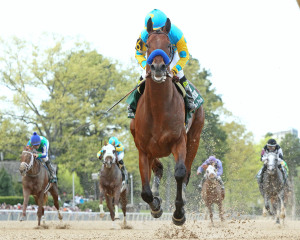