If there’s one thing to know about me – it’s that I LOVE Southern food! I have an addiction to Southern food that would put Britney Spears’ Cheetos fetish to shame. So I have to say, I was almost as excited to eat while in Kentucky as I was to see the horses!

While on our trip, James and I went to three fabulous restaurants. The first was The Merrick Inn. This one was right in Lexington and set the tone for two more great meals to follow. The Merrick Inn is where I tasted my very first Mint Julep, (of course I had to try the signature drink of the Kentucky Derby!). The Mint Julep was a little confusing. At first sip, it was amazing…sweet and tangy with just a hint of mint…perfect. But as I mixed up the drink, maybe that sweetness settled…I’m not sure, but it was kind of down hill from there. I ended up not being able to finish it for it was too strong…but I vowed that will not be my last Mint Julep! 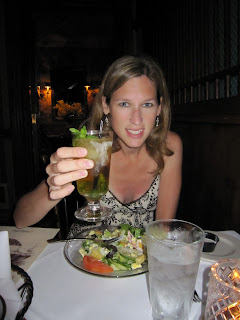 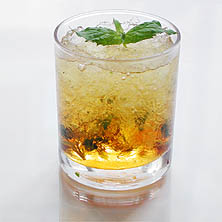 The second restaurant we visited was called The Boone Tavern. This Tavern is located about a half hour away southeast of Lexington in the sleepy little village of Berea. This town was adorable…but if you want to get a really good look at it, you have to go before 5:00 because they totally roll up the sidewalks by then, (of course, we arrived around 5:30). It reminded me of what Mayberry must be like.

Anyway, The Boone Tavern was home to some of the best fried green tomatoes I’ve ever had. Now – no one can top my grandmother’s, but these were pretty good! They were garnished with a fancy little sauce, (no idea what it was)…and were delicious. Thankfully, James doesn’t like tomatoes, so I had these little babies all to myself. 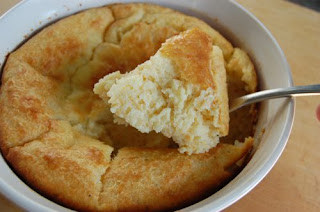 Instead of your traditional bread or rolls with your dinner, The Boone Tavern served spoonbread, hot and fresh from the oven. I. Love. Spoonbread. To me, if you mixed cornbread and grits together (omg I love grits!) – you’d have spoonbread. Some butter and a little bit of salt and pepper, and you have amazingness. I believe I said something along the lines of, “this spoonbread is so good that I just want to roll around in it”…which then prompted quite a look from James!

Our last fancy meal was served up by the Beaumont Inn in Harrodsburg, about 45 minutes southwest of Lexington. Our waitress here was just delightful, sweet and charming how I imagine all Southern girls to be. Only at a fancy restaurant in Kentucky would you see Fried Chicken on the menu…so that’s exactly what I got…and it was perfect. 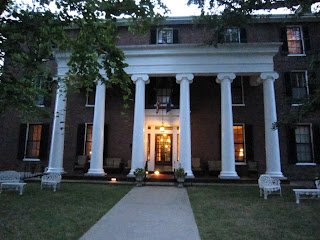 If you’re ever in the South, don’t be afraid to sample some new delicacies…I guarantee you’ll love them! (Except for James and the fried green tomatoes!).