But last week I had the biggest, Laurie, you are SUCH an idiot, moment at the barn. 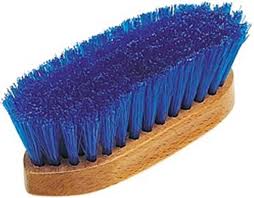 As you all know, Misty is a sensitive girl; she is quick to tell me if something’s bothering her, and I work to fix it. However, sometimes I can’t fix what’s bothering her. She will always swing her head around to fake-bite at me when I’m tightening her girth. But there’s nothing I can do about that as I HAVE to put a saddle on her if we’re going to ride! I do the best I can for her though and inch the girth up nice and easy, one hole tighter at a time.

Along with the girth, Misty doesn’t particularly enjoy being brushed, especially with anything other than my extra soft-bristled brush. I know that Thoroughbreds are thin-skinned, so I use my soft brush as often as possible, but even with it, she’ll still swing her head around to tell me I’m bothering her.

Now Misty is Misty – she likes to complain for the sake of complaining…or so I thought. I’d brush off her irritation with our grooming sessions by thinking, oh she’s just being a mare. But then I started thinking, maybe she’s not just being bratty.

And then the other day, I figured it out. Yes, after four years of owning this girl, I finally put two and two together. Normally when I brush Misty, I work in short, quick strokes…and she fake-bites the crap out of me. So, four years later, I thought to myself, why don’t I try long, slow strokes? And there it was folks. All of a sudden, I had a happy, quiet, non-fake-biting Thoroughbred mare on my hands. 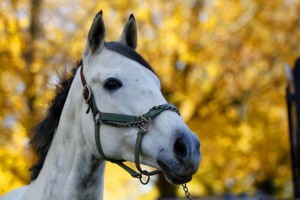 Why, ON EARTH, had it taken me FOUR YEARS to figure this out? If only I had listened harder to Misty. If only I had put more time into truly figuring out her behavior. Instead, like an idiot, I had just assumed that this is just how Misty is, and left it at that.

For four years, Misty had been telling me over and over again that she was bothered by the short, quick brush strokes…to, for goodness sake mom, try something else! And the second I did, she was as good as gold.

Now this makes me wonder what else I’m missing, what else has Misty been trying to tell me? Moving forward, I vow to truly listen to my girl and not brush off her bad behavior as her being mare-ish, (though mare moments will always exist). She was telling me in the only way she knew how, and I wasn’t bright enough to understand.

Misty – sorry for being such a slow learner. Please don’t give up on me.