Today I ventured up to Harrisburg, PA for the Retired Racehorse Trainer Challenge Finale. It took place at the Pennsylvania Horse World Expo, an expo that, surprisingly, I had never attended before. But the lure of the Challenge and the idea of seeing my beloved Brazilian Wedding again enticed me to cross state lines for the day!

The Maryland Expo is always crowded, but I was totally overwhelmed by the turnout at PA. We arrived around 11, browsed the vendors, hit Jim Wofford’s demonstration at noon, and then grabbed lunch. It was about 1:30 by then, so my group thought we should make our way to the Equine Arena, where the Challenge would be held, find some seats and eat.

Well – that was impossible.

We entered the arena with arms loaded with hot dogs, nachos, and sodas…to find standing room only. So back out we went where we sat on a bench and downed our food in 10 minutes as we watched people just stream into the arena. At that point, I started to panic, thinking there wouldn’t be enough room for me to see the Challenge. I believe I said something like, “I’m going to throw some elbows if there’s not enough room in there for me.” Because, yes, the Challenge meant that much to me.

So back inside we found some space standing along at the top rail. The demonstration before the Challenge went over a little, so there weren’t too many people leaving. At one point, a group of 4 or 5 people left their seats, and as I went to make my way over to them, someone pushed past me and said, “those are my seats – I’ve been waiting over an hour for this.”

But I let it go because moments later I scored front row seats – yes!! Then out came Steuart Pittman with the horses and their trainers. I was beside myself with happiness/excitement/you name it!

Steuart gave a brief overview of the program while the horses and riders warmed up. Then each trainer was hooked up to a mic and talked a little about what the last five weeks had been like with their chosen horse.

I was blown away by each and every horse! First, Tiffany Catledge rode High Level, the horse she originally picked but had abscessed at the beginning of the Challenge. She had only started riding him about two weeks ago…and here he was, cantering over jumps as relaxed as could be. My favorite part was when Tiffany completely dropped her reins, spread her arms out wide, and High Level continued to canter around the arena, smooth and steady, and without a care in the world. 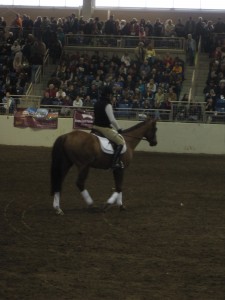 Next came Kerry Blackmer on Four X The Trouble, aka Tempyst. At the Maryland Expo, Tempyst was a ball of nerves, very spooky, and incapable of going straight. Now five weeks later, Tempyst was by far the most relaxed…moving (straightly) around the arena with a nonchalant, almost lazy air about him. It’s almost like he knew how much I love lazy OTTBs, (like my Misty). The best part was when Kerry walked Tempyst right up to us in the seats to let him say hi!!! I could not get over what a puppy dog he was…and he certainly loved the attention! 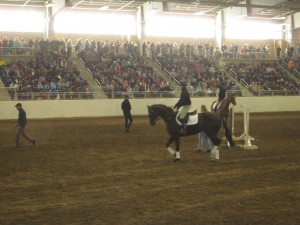 After Kerry was my favorite, the grey mare, Brazilian Wedding. Brazil’s trainer was Eric Dierks, who created the most amazing training videos to showcase Brazil’s progress and talent. Brazil, with her adorable lower lip flapping, sauntered around the ring like, been there, done that. Eric noted that Brazil was a horse who liked to have a job, liked to be challenged. She popped over the crossrails like it was no big deal…but she totally shined when Eric raised the jumps and started cantering them. She sailed over with perfect form, snapping her knees up, and pricking her ears, asking for more. 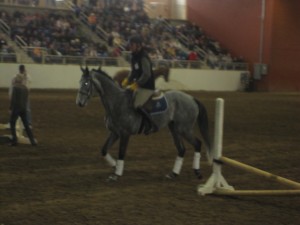 And finally we saw the big teddy bear, Solidify. He had originally been chosen to be the alternate horse, but stepped up to the plate when High Level went lame. Solidify – that horse is ALL try. You could tell by just watching him go around under Tiffany’s tutelage that all he wanted to do was please her. At first he struggled to pick up his left lead canter…but then rolled into it so beautifully, so clean and natural. 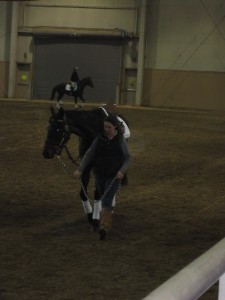 In the end, Eric was announced the winner of the first ever Retired Racehorse Trainer Challenge! While I was happy for the trainer of my beloved grey mare, I really do believe that each trainer deserved to win. Each brought so much to the Challenge – brought SO much to the world of off-the-track Thoroughbreds.

I am so grateful that I was able to participate in this Challenge, even as just a spectator. (And speaking of spectators…I was one of 3,000 to 5,000 today in PA!!!). 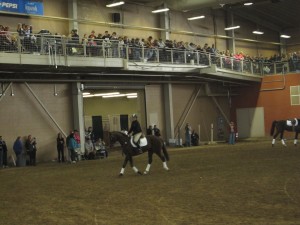 The sweet Tempyst again…but check out the crowd in this one! Standing room only up there!

I’m also totally bummed that this is over – how will I pass my time now? I had my RRTP FB page stalking routine down pat!

I had the pleasure of speaking with Steuart after the Challenge and I, again, want to extend my sincere congratulations to him and everyone involved in this Project. It was an absolute success, and I (and thousands of others) enjoyed every single minute of it.

(Also – to the new owner of Brazil…call me. I can’t take her now…but when I buy my farm (hopefully within a year), I’ll be ready!! Keep in touch!).