I have yet to succumb to the pressure and read Fifty Shades of Grey. My sister, my co-workers, even my mother-in-law, has hopped on the bandwagon. And while I usually try to keep up with the current best-sellers, the only shades of grey I’m interested in is those of my Misty.

I’ve been around horses for my entire life, but I have never worked in the horse industry. Therefore, I can’t make blanket statements; I can only judge my horse experience based on the family and lesson horses that have been a part of my life.

That being said, I don’t think there could be anything more personable and…theatrical…than a Thoroughbred mare. But I think what I love most about Misty is her spunky personality. She’s not a gelding who will be happy to see you every day. Misty isn’t always happy to see me. My presence means either food or work…and since my mother usually feeds Misty before I can get to the farm after work, I usually mean work.

Misty’s lucky. “Work” is usually a 45 minute ride approximately 3 to 4 times a week. Is that so hard? I don’t think so – but Misty does. As I tack her up, Misty stands quietly in her cross-ties, head lowered, ears back, eyes half shut. If she can grab a cat nap for even 5 minutes, Misty will do it. 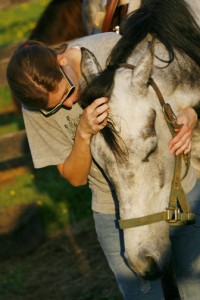 Can you wake up so we can go for a ride?

Then comes the saddle. Now the fun really begins! Her nose takes on this slightly snarled form that only I can recognize since I know that nose so well. Misty’s quite girthy – always has been, always will be. I have to give her credit because while I’m tightening the girth (as slowly and nicely as possible), she always stands still, which I appreciate. But she’ll snake her head around and nip at the air because she just has to tell me, every single time before every single ride, that she doesn’t like that. Sorry Mis, but this is the only way I know how to put a saddle on!

I have to laugh at her though. I think most people would be scared if their horse acted like this – but I know Misty won’t actually bite me because if she truly wanted to, she would have by now – 10 times over. But she’ll nip at the air just far enough away that I know I’m safe, but she just has to do it. She just has to remind me – one more time – that she doesn’t like the girth to be tightened. Funny horse. 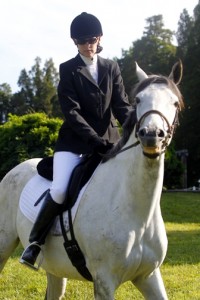 Once we’re out in the ring, she’s (usually) very good and will do (most of the time) as she’s asked. But there are a few things she doesn’t like. If she’s trotting, don’t you DARE ask her to go faster! She’s moving – what more do you want?! If I urge her with my legs/heels, she’ll throw her head up like, enough! If I cluck or kiss at her to keep going, same reaction. The best is her tail. Sometimes she’ll flick it around so much it starts to look like an airplane propeller!

Remember those cartoons when a performer/comedian would be onstage…how a giant hook would come out from the sides and pull the performer off if he wasn’t funny enough? That’s what I imagine Misty is trying to do with her tail. If only I could reach up and drag her off my back! 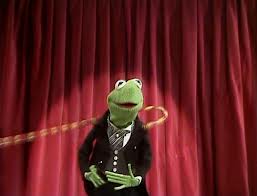 I’m lucky to have such a vocal horse though; horses like Misty will tell you how they feel in every situation, so it’s easy to diagnose problems or pain. Last year when Misty had a mild case of Lyme’s Disease, it only took me a handful of bad rides to realize, “hey – this mare isn’t in heat – something else is going on here.” And a quick blood test later, we had our answer. She’s a truly intelligent animal. 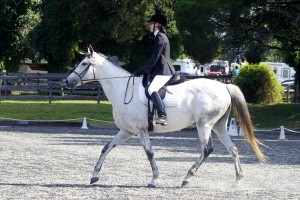 Pretty girl always does her best

I could go on about my sassy grey forever – here’s a quick update! She and I have had a great summer – lots of riding (much to her chagrin!). She has been picking up her canter nicely, which has always been my favorite/her least favorite gait as it requires a little more effort on her part. Transitions have always been a little tricky, but she’s figuring everything out and getting her leads. And as of last week, we finally started hopping over some very small fences! It took her a few minutes to figure it out, but she seemed to have some natural ability.

We have two more small shows, both dressage, later this fall – then that’s it! Fingers crossed for another mild winter so I can keep my girl going!