Wednesday morning in Lexington dawned bright and sunny. We had a 9:30 appointment at Darley Stud, and arrived there right on time. This tour lasted almost an hour and was wonderful! Our tour guide was super friendly and knowledgeable, and we walked along the pastures, into the barns, and met Holy Bull, Bernardini, and Medaglia D’Oro, among others. 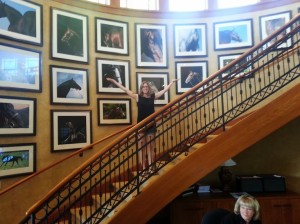 As per usual of all large farms in Lexington, Darley’s grounds were absolutely breathtaking. We took a moment after the tour to pose for some pictures – you just can’t pass up photo opportunities like these! 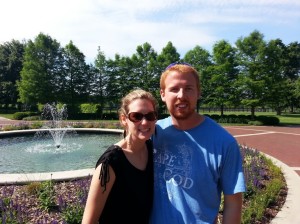 Of course the grounds were breathtaking.

Our agenda for the day was pretty packed, but we had an hour or so before we were going to grab lunch and then head to our tour of Three Chimneys Farm. As we were driving down Pisgah Pike, we passed an old church and cemetery that James and I walked through the first time we had visited back in 2010. James mentioned to my step-dad that some Revolutionary War soldiers were buried there, and since we had some time to kill, we turned around. I can’t remember all the specifics about the church, but it’s one of the oldest in the area, and therefore, it’s no surprise that the cemetery is quite historical as well.

As we were meandering around the grounds, a lady who works at the church walked by. We all made conversation with her, she showed us the inside of the church, and then we followed her back to her office to get some pamphlets on the church/area. She was asking about our trip, what we had done so far, what our plans were, etc., and I told her about the farms we had already toured. Then I randomly mentioned that the farm we really wanted to tour was Darby Dan because that is where Kyle’s all-time favorite racehorse, Shackleford, now stands, but that farm does not offer tours. When I said that, our new friend smiled and said she used to work at Darby Dan and had a friend who, if she was available, would be able to get us in for a private tour!!

She called her on the spot and it was agreed that she would meet us at Three Chimneys after our tour and then we’d head over to Darby Dan! We would get to meet our Shack!! My whole family had fallen in love with him after witnessing his Preakness win in 2011. Since then, Kyle diligently followed his career. This post has a great picture James took of Shackleford winning the Preakness Stakes. Last year, I sent this picture to Shackleford’s trainer, Dale Romans, to autograph, and then I gave it to Kyle for Christmas.

Anyway, lunch was at the famed Wallace Station where we all had delicious sandwiches and ate outside on the deck beneath the shade from a few massive trees. As the girls were finishing up, the boys walked over for a quick game of horseshoes. What a delightful time!

Three Chimneys, as usual, provided us with a wonderful tour of their facilities and we got to meet Big Brown, Red Giant, Exchange Rate, Lewis Michael, etc. 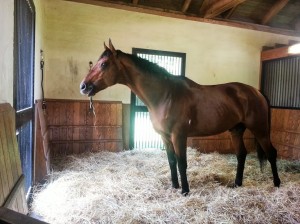 Before we knew it, the tour was over, we met with our new tour guide, Anne, and we headed over to Darby Dan. When we pulled up, who was standing outside waiting for us?! The one and only Shackleford! He was standing there in all his handsome chestnut glory waiting to meet his biggest fan! Of course we took many pictures, but as none of the other farms would let anyone touch their studs, we gave Shack some space. Then the stallion manager said something unexpected – we could pet him if we wanted to!! OMG!!! Of course we all did and took more pictures. Kyle and I were in our glory!! Shack was a perfect gentleman and stood regally while his fans fawned all over him. 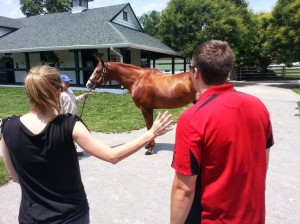 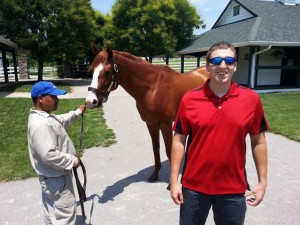 Shack and his biggest fan! 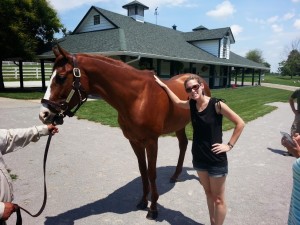 He was so smooth and shiny. Love this horse.

The stallion manager then took us on a tour of the breeding shed and answered some questions we had about the farm, Shackleford, etc. It was an absolutely wonderful experience.

I still can’t get over that we were able to meet Shack, pet him, and have a private tour of a farm that does not offer tours. Thankfully, we were in the right place at the right time, and made conversation with someone who generously went out of her way to help us. Meeting Shackleford and visiting Darby Dan was the highlight of our trip, and we are so grateful for our new friends who made this dream of meeting Shack come true! Thank you!