The weather is finally getting a little better here in the Mid-Atlantic, and I, for one, couldn’t be happier. Dry, sunshine-y days equal lots of ride time!

Last week I rode Bailey three times – how crazy! The rain stayed away and the temperatures sky-rocketed up to 70+ degrees. On Wednesday, I decided I would ask Bailey to canter for the first time since I bought him in January. He’s still pretty out of shape, but I just wanted to ask him, get him to transition into it, go a few strides, and then pull him up. It was mainly an exercise in ‘how will you react?’ rather than fitness. I was definitely nervous since I hadn’t cantered him since I tried him out in December.

I asked him for his right lead canter first, and he transitioned with no problem. He was a little fast getting into it, but settled about three strides in. I let him go about half of the ring, and then I pulled him up. And for the heck of it, I asked once more and same thing, pulled him up after half a circle. We turned to go the other way and Bailey definitely knew what was coming next! He jumped into the canter pretty quickly, but was on the wrong lead. I pulled him up, asked again, and not only did he get the correct lead, but we had our best transition yet. It was much smoother and slower, and I got in my two point to get off his back and out of his way a bit. We did a half circle again, and then I pulled him up. 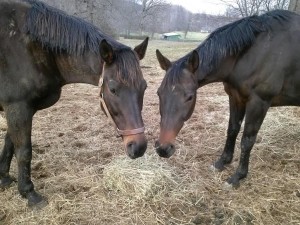 Bailey (on right) sharing some hay with his BFF Jack.

While he was breathing a little hard, he definitely seemed to have enjoyed himself. And what’s best – no explosions or crazy antics (at least for now!) as would have been customary for my Mystique. Since he’s still out of shape, I won’t canter every time I ride, maybe once a week for now. It’s not fair for me to ask him to do something he’s not really physically capable of doing (or, at least, doing well) at this point. No need to rush it or overface him. I just wanted him to know that cantering is on the table and something that should be semi-expected.

On Saturday we had another first, and this one was SO much more exciting than cantering!! We rode around in the “big field” and little trail with everyone else. Unfortunately, Misty was never good outside the ring. She was terrified of everything, and I learned quickly that big open fields and trails were outside her comfort zone…so I didn’t push it. But it was always a little saddening to see everyone else riding happily through the bigger fields while we were stuck in the ring. But it is what it is – I respected the fact that she just didn’t feel safe outside the confines of our ring, and I actually love ring work anyway, so it worked out.

But I knew I wanted my next horse to be able to leave the ring, trail ride, etc., and Bailey’s previous owner said he was always fine outside the ring. So on Saturday, the weather was great, the wind was down, and I was ready to give it a try! We started in the ring for a few minutes, and then left with my mom, sister, and my mom’s friend who is also the owner of the farm. I put Bailey at the end right behind my mom’s horse, Jack, Bailey’s BFF.

I could not have been more proud of Bailey. He just walked behind Jack with his head down like, no big deal. The big field is about 15+ acres, mostly flat, and completely open sans a few trees. Along the edge of the field is a wooden section with a small trail through it. Into the field we went, along the top half, into the trail, along the bottom and side, and then back up. On the way back, Bailey decided he wanted to lead. He wasn’t pushy, nor was he walking particularly fast, but before I knew it, we had overtaken the group and were in front. What a brave, cool guy. He looked around a bit, but nothing fazed him at all. I was on Cloud 9 – this was big stuff for me! I hadn’t ridden successfully (and safely) in the big field since my old Quarter Horse, Jerry, who passed away in 2008.

I simply cannot wait to get out of the ring more and have some fun!! I think some trail riding (off the farm) and a paperchase is in our future! Yay Bailey Boy!