Well, at least that’s what he’s trying to do: bend. Bailey has been home for three weeks now, and we’ve been doing a lot of riding, both of us gradually getting in shape. As we’ve been doing our of trot work, it’s clear that Bailey is really tight on the right side, which is normal for ex-racehorses.

I’ve been working him equally in both directions, trying to get him to reach down and stretch, as well as bend on the circle. Sometimes we have great success and other times, not so much. It’s a little frustrating, but then I remember that he’s basically been out of regular work for almost three years. He came off the track at six, and his previous owner had him for four years, training heavily for the first two. He was ridden very lightly for the last two, and then he was lame most of last year, my first year with him.

So considering this, I think he’s making great progress and will (hopefully) be bending beautifully in no time! The fitter he gets, the easier everything will be. I’m also thinking of getting the saddle fitter out as well.

In the meantime, his stall nameplate came in! 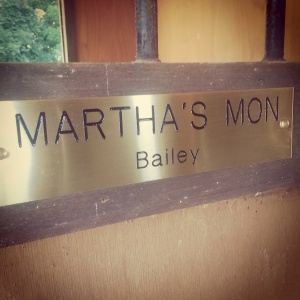