Country Matters: The Pleasures and Tribulations of Moving from a Big City to an Old Country Farmhouse

If there’s one thing I love, it’s a great memoir; I will read anyone’s story. I first became acquainted with author Michael Korda through his book Horse People, and enjoyed his outlook on life with horses. He is both serious and funny and, as a horse person, he has my number – we really are all alike! My Kindle recommended Country Matters after I had completed Horse People, and this memoir is equally as entertaining.

While Country Matters, of course, has some very horsey elements, this book focuses more on country life, and Korda showcases his family’s transition from big city dwellers to country folk who work on fences, own pigs, and drive decades-old tractors. What I also like about Country Matters is that it answered some questions I was left with after reading Horse People. 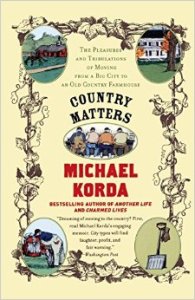 For example, I had wanted to know why the Kordas needed live-in help with their horses. (The Bacons lived in an addition attached to their house). Well, I learned in this book that this was necessary because when they bought their farm, the Kordas were still mostly living in the New York; the farm was their weekend getaway, so the Bacons would care for their horses during the week. Makes perfect sense!

Not surprisingly, however, the Kordas were lured to the country on a permanent basis not long thereafter. There is something about having the space to stretch out and breathe that one longs for. I think many people are able to relate to this – that desire to put down real roots in an area where it’s just you and Mother Nature.

“The presence of the horses, and all that came with them, gave it a certain poids, gravitas, sense of purpose. It was a pleasure – more for Margaret than for me, but I had my moments of feeling it too – to arrive in the car on Friday evening and see them in their fields, perhaps fifty yards from the driveway, snorting softly as horses do when they see something going on…and realize that it was ours – that those were our trees, fields, woods, walls, and barn, not necessarily better than anybody else’s (in many cases not as good), but different because they belonged to us.”

My husband and I have lived on our farm for just over two years now, and we still have moments where we look outside and think, this is ours. The land, the trees, the grass, and everything that lives here – it’s ours. It’s still a pretty heady feeling. Intoxicating, really.

Like us, the Kordas bought a very old fixer-upper house. Unlike ours, the Kordas’ house was worse since it was built in the 1700s, (my house is just shy of 100 years old), so the work it needed at times was much more extensive. But like the Kordas, James and I know exactly what it’s like to start a project, a project that seems fairly simple in nature, and watch it explode. Once you start digging around in an old house, one thing always leads to another.

“One of the first things you learn about owning an old house is that even when things are running smoothly and everything looks fine, something, somewhere, is probably going wrong.”

“This, as it turned out, was something of a mistake, and gradually evolved into a bigger (and messier) job than we could possibly have imagined, making me feel that the phrase “Leave well enough alone” probably ought to have been carved into the wood above our front door, or possibly above each fireplace.”

James and I have learned to budget double (or triple) for what every project should cost because it’s inevitable that something else will break, or lead to another disaster just waiting to happen that needs immediate attention, more so than the initial project.

The following passage is hysterical for anyone who lives on a farm and has to care for outdoor animals on a regular basis will learn to become intimate with Mother Nature. And if there’s one thing I’ve learned about her, it’s that she hates me.

“What I had failed to understand is that Mother Nature really isn’t a domestic goddess at all – her intention, if she has one, appears to be to sweep away all traces of human habitation and construction and return the land to what is was before the Native Americans walked across what is now the Bering Sea from Asia and began to mess with the North American continent.”

If you’ve ever thought about trading the city for the country life, then this book is a must-read. I thoroughly enjoyed it and found myself laughing along with Michael, and then reading paragraphs aloud to my husband who would sigh and say, ‘Yep, that sounds about right.’ But given all we know now about renovating a fixer-upper country house, given the choice, we would still do it all over again.

“It looks like an idyllic scene, and – who knows? – perhaps one day in the future somebody will unearth a photograph of Margaret and myself, on horseback, with the house in the background, or sitting in front of the porch together…a loving couple, the handsome old house, the big trees shading it all – and envy us our happiness, or perhaps the illusion of a simpler, better time in the past…”