According to the calendar, it’s officially spring in Maryland. But, of course, Mother Nature hasn’t gotten with the program. Last week, it snowed. It wasn’t a lot (only about three inches) and it hardly stuck, but still. It was snow, and it wasn’t wanted!

We’ve had some randomly nice/warmer days, but we are still on the cooler side. I was hoping we’d have a warm, dry spring to make up for our horrible winter, but no such luck so far. If I had to choose between the two, I’d choose dry over warm. If it’s a little cooler than normal, I can still ride. But if it’s super wet and muddy, I can’t, regardless of the temperature. 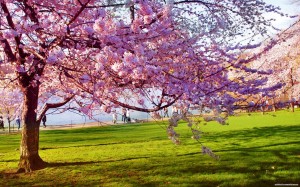 Sorry for all the generic spring pictures – I just haven’t taken too many pictures of Bailey yet!

I’d been riding Bailey as much as I can given the weather and the fact that I’m just getting over the plague (stomach flu). I haven’t been that sick since middle school – I wish I were kidding! Anyway, my last ride with Bailey was yesterday, a 65 degree day. (Today it’s pouring…same outlook for tomorrow).

I was the only person at the farm, and it was lovely. I was a little nervous to ride Bailey, who is still an unknown, really, without anyone there, but I figured what the heck. I’m not doing anything crazy anyway.

We walked and trotted in the ring and he was super good – even when a plastic bag blew by! Patriot, my sister’s horse, would have lost it then. Bailey noticed it but didn’t react. Nor did he react when the neighbor started his huge diesel truck and drove off kicking up gravel, (that would have sent Misty over the edge).

After about 40 minutes of work (mostly walking still), we called it quits. It felt so good to be outside in the warm air with my sweet boy. (And feeling better post-plague felt pretty great too!). I gave him his requisite handful of animal crackers as a treat and left.

The forecast is calling for warmer temps and sunny skies in the coming week, but I’ll believe it when I see it.