So back in the late fall, Misty decided she didn’t want to canter anymore. She wasn’t showing any signs of lameness, nor had there been any significant changes to anything other than the weather. She was still trotting around like a star. Being a sensitive girl, I attributed her silly behavior to the falling temperatures, as well as my inability to ride as often thanks to the early darkness that covers us that time of year.

Misty had similar issues (but to a much greater degree) the year prior when she had been diagnosed with Lyme’s Disease. So this year, my vet came out to draw some blood, and called a few days later to report that Misty had tested negative. Concerned about my girl’s sudden ill-will to my favorite gait, the canter, my vet and I discussed Misty at length. 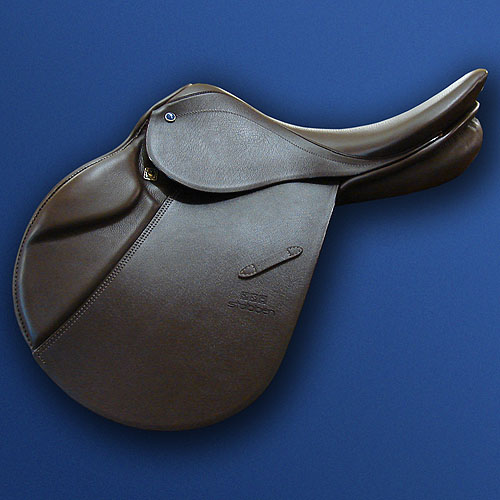 This isn’t my exact saddle, but it’s pretty close.

The first thing she said was, have you ever had a saddle fitter out? Hmm. Negative. So I called someone who came very highly recommended via my local horsemen’s Facebook page and scheduled a visit. Two weeks later, she was out and testing my three saddles on Misty: my current all-purpose, my current dressage, and my older, hardly used close contact.

The saddle fitter was incredibly knowledgeable, had a fun, bubbly personality, and didn’t make me feel like an idiot for not having any decent saddles! All along I had thought that Misty was a medium tree. She’s very high-withered, but I still thought my mediums fit her fairly well. Wrong. She’s a narrow. And a very narrow, at that. Crud.

My CC (which I don’t ride in anymore because it doesn’t fit me), naturally, fit her the best. But it still wasn’t great. The AP, the one I ride in 95% of the time, was really bad. It sat a little too low on her withers and apparently was pinching her sides horribly. Sorry Misty Mystique. And the dressage saddle was the worst of all three. It had been listed as a medium when I purchased it on consignment, but the saddle fitter thought it was most likely a wide. Yikes.

Like any good saddle fitter, mine had numerous sizes/brands in her car and we tried about 10 different ones on Misty. As soon as she put a narrow on her, I could see an immediate difference – it just looked right. Finally.

Armed with this new knowledge, and feeling like a terrible horse-mom, I ended up ordering a custom Stubben Edelweiss. I know. I know. That’s a lot of money. But Misty is my child, (we don’t want two-legged children), and I had enough money set aside that I could do it. James declared it my early Christmas present, and said that I wouldn’t be getting anything else (and I really didn’t!). Fair enough.

My saddle arrived about a week ago, but with this crappy weather, I haven’t been able to ride in it yet. Come on spring!

Do I think this saddle will be a magic fix for all of Misty’s anti-cantering issues? Absolutely not. She will always be a MARE! But I can, at least, rule out one more thing – it’s not the saddle. Misty is a difficult girl (at times) and that will always be who she is. I can’t say that I enjoy her random outbursts, but her sassy attitude is also what I love about her. Training her has been one of the biggest challenges that I’ve faced in my life, and I can definitely say that it has been and will continue to be worth it. And at least I’ll be a little more comfy during these outbursts in my new Stubben!

And ps…does anyone want a medium to wide, short-flapped dressage saddle? Haha!