My Bailey Boy is on sick leave. Sigh. He is currently suffering with some major issues with thrush/possibly white line disease. He had two front shoes when I got him, and I was told that he has always had front shoes. If a horse absolutely has to have shoes in order to be sound, I’m fine with them, but if there’s a chance he could go without, that’s always my preference. Regardless, I figured I’d cross the shoes or no shoes bridge when I came to it.

In late January I had my farrier out to pull his shoes/trim/replace shoes and the first thing he noticed was that Bailey had multiple thrush pockets under the shoe of his LF. It was obvious that Bailey’s previous farrier would pull his shoes, trim, and then replace the shoes on top without treating the thrush first. We decided to stall him for the weekend sans shoes and treat him with some heavy-duty thrush meds before replacing the shoes. Everything was fine. 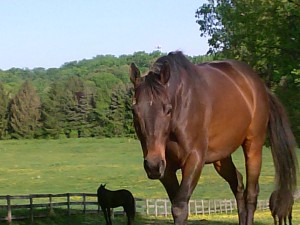 About six weeks later, I had my farrier out to trim again and knowing that I always prefer my horses barefoot, he suggested we leave the shoes off this time. Leaving the shoes off would help with the thrush issues, and since it was muddy (it was March), his hooves would have time to toughen up before the ground hardened up in late spring. We pulled the shoes and Bailey was fine – sound and happy. He was willing under saddle and not having any issues. My farrier came to trim again 6 to 8 weeks later and this time he was a little worried. Because the nail holes from the shoes were growing out, he told me there was a chance his wall would chip if he did a lot of stomping because of the flies and whatnot. If that happened, there wouldn’t be much wall to nail another shoe onto – not to mention we were trying to avoid shoes altogether. So we made a plan to use Perfect Hoof Wear (a wrap, essentially, not a shoe) if he chipped.

A week later – he chipped and was pretty foot sore, understandably. My farrier ordered the Perfect Hoof Wear kit and he came over last week to get started. That’s when we found the unexpected. When I got Bailey, his toes were long and he didn’t have much of a heel. My farrier was gradually starting to shorten the toe and shape his hoof to get him back onto his heels. Since his toes were still pretty long, my farrier said, “I’m going to take his toes back a bit before we get started.” He starts trimming and I hear, “Oh sh*t. Holy sh*t!” That’s never what you want to hear!

As he started trimming his LF, a gigantic thrush pocket opened up. After he scraped all the goo out and cleaned it up, it was probably about one inch high and one to two inches wide. Poor Bailey. Needless to say, a new plan of action was needed! But no worries – my farrier was on it. He came back the next day with all the tools he needed, cleaned it up, packed it with copper sulfate to treat the thrush and encourage hoof growth and then continued with the Perfect Hoof Wear wraps.

Bailey was a champ. He got a little wiggly at one point, but stood like a soldier for most of the application, even when my farrier dug out the thrush and it was obvious that my boy was in pain. The diagnosis – I’m told he could be mostly sound in a few weeks but that it could take months/a year before he’s 100% to go back into training/heavier riding because he basically just needs to grow new hoof. As soon as Bailey’s trotting and cantering soundly in his field, I can start light riding at the walk again. That could be next week or next year. Either way, I’m taking care of my boy.

Obviously, any plans I had of training/showing with Bailey this summer are on hold, and that’s okay. All that matters is taking the best care of him possible and getting him back on his feet, literally! I’ll keep you all posted…but prayers for a swift Bailey Boy recovery would be much appreciated!