When people heard we were planning a trip to Lexington, they all encouraged us to tour a bourbon distillery. James and I aren’t big drinkers, but if there’s a chance for me to learn something about anything, I’m in.

There are multiple distilleries in Lexington to tour, but we chose Woodford Reserve for no particular reason. On our way out there, we made a wrong turn and ended up driving by this old, abandoned distillery. We joked that we got here just a few years too late! 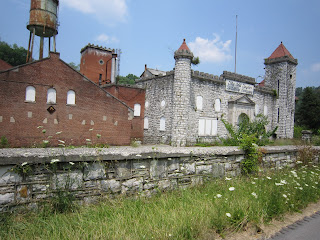 Woodford offered a two hour tour and it was packed full of info about the Kentucky area itself, as well as the bourbon distillery process. Apparently, once the state of Kentucky realized how great their land was for making bourbon, they tried to pass a law stating it would be illegal for any other state to produce it as well. Unfortunately, their request was denied.
During the tour, we were ushered from one large building to the next. I can’t remember all the specifics, but one building was extremely hot – this was where all the oats and barley and what not were mixed together. We saw how the barrels were made and how an empty, finished one was placed on railroad tracks and rolled down hill to the next building to be filled with bourbon. They allowed one person from our tour group to use the wooden hammer and nail the final cork into the side of the barrel. I REALLY wanted to do this, but so many of the men in my group seemed eager to take a swing at it, so I kept my hand down. What a Good Samaritan I am! 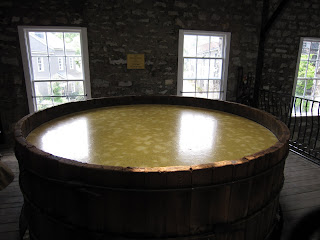 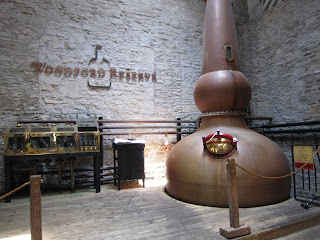 The second building was where they house all the bourbon while it distills for 7.5 years before they bottle and sell it. This building held many millions of dollars worth of bourbon…and it smelled delicious! The air in this building was kind of smokey/sweet…very enticing! I believe the tour guide said they called the smell, Angel’s Breath. (I could be wrong, but I doubt angels are chugging bourbon). 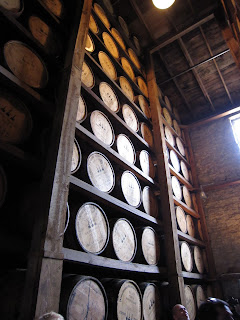 The final building reminded me of one of my favorite shows, How It’s Made. There were conveyor belts and packaging materials…and all types of assembly line stuff that also reminded me of certain episodes of Mr. Rogers’. (Favorite episode of all time – when Mr. Rogers visits the crayon factory!).
Finally, we were able to try some bourbon! It was definitely strong for James and I who rarely drink, but it was sweet and nutty and quite good if sipped little by little. Then it was off to the gift shop to purchase some bourbon chocolates!